Blow Dry Your Hair, Not Your Breathers 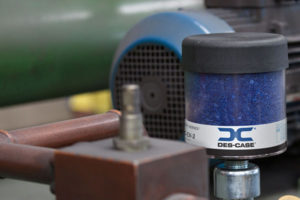 Blowing dry air through a spent breather or heating the breather will dehydrate the color indicator and turn it back to something close to its original blue color, but it does not “clean” the capillary pores or fix any damage to the pore structure of the silica gel. As such, using a breather that has been “regenerated” will have far less adsorptive capacity. This is particularly true in gearbox and hydraulic applications where microscopic oil droplets from oil vapor can also prevent the breather from adsorbing moisture if re-used.

But perhaps the most compelling reason not to dry out a breather is the impact on the particle media. Simply blowing compressed air through the media will not displace the particle trapped within the breather. So, if a breather that has been dried back from pink to blue is re-used, the particle media has not been regenerated and starts to “cake”, meaning the airflow rating of the breather will not match the original specification. Reduced airflow can have serious consequences such as under or over pressurization, oil foaming and aeration, and even tank collapse.

How Does a Breather Work? 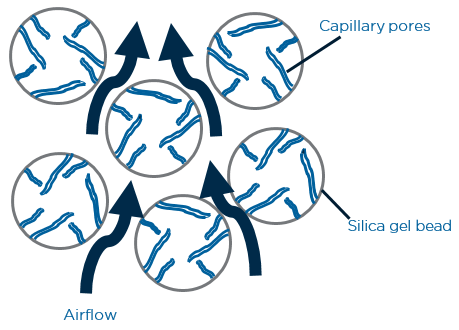 Desiccant breathers contain both silica gel to adsorb moisture from the air and particle media to remove fine particulate down to 1 micron. Let’s first consider the silica gel. Silica gel works because of the pore structure of the gel, which contains tiny capillaries.

As moist air flows through the silica gel bed, moisture is attracted and retained within the capillary pores through a process called physisorption. This process causes the water to enter the capillaries and be retained due to capillary action. In doing so, the water hydrates the color indicator, which is also retained in the pores, causing it to turn from blue to pink. However as the water enters the capillaries, tiny submicronic particles also enter. As a result, the pore structure and capillaries tend to “plug off” once water saturation has occurred. In some instances, water can also affect the capillary pore structure particularly at higher temperatures.

Additionally, the media used to remove particulate from the air flowing through the media has a “loop” fiber design, designed for maximum dirt retention with minimum initial airflow reduction. As a result, particles greater than 1 micron that air trapped in the media and bound tightly to the media so they can migrate downstream.

There’s an Even Better Way to Extend the Life of Your Breather!

A better way to get longer life out of a desiccant breather is to stop guessing when it needs to be changed. Our connected breathers use two embedded sensors inside the breather to accurately measure temperature and relative humidity, which is used to accurately measure the percentage of remaining breather life and whether moisture is coming from the outside – for example a humid ambient operating environment – or from the inside due to shaft or wiper seal ingression or a leaky water cooler. 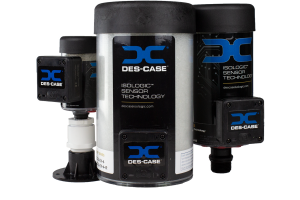 The other benefit of measuring breather life with sensors is the estimated 20-30% longer life of the breather. The reason for this extended life is twofold. First, since the sensors determine when to change the breather there is no need to use a color indicator. Since a portion of the volume within the silica gel capillaries of a conventional breather is taken up with the color indicator, there is less “space” for water retention. By contrast IsoLogic breathers contain clear silica gel in its natural state, freeing up the volume that would have been used for the indicator to absorb moisture. Secondly, colored indicators typically change color slightly short of when they become completely in effective. In the case of a blue to pink indicator, our tests indicate a possible 10-15% life extension just based on accurately measuring “end-of-life”, while with gold to green indicator the life extension is even more dramatic since methyl violet indicators change color much earlier with maybe 15-20% life left in the breather.